“We think ourselves gods, capable of creating and destroying anything that we please. The reality of this universe has become more apparent with each passing generation as we stretch our influence deeper and deeper into the stars. The truth is that we are not alone in the universe, and furthermore, we are far from the superior beings we think ourselves to be. We are toddlers, taking our first steps into the wide, open world that is the universe.”
- An excerpt from “The State of our Race” by Alfred Jackson.

Humanity is one of the youngest species in the universe. Their means of space travel were limited for the bulk of their adolescence. Humans’ bodies succumbed easily to the cold vacuum of space, and their propulsion was, for the vast majority of their existence, primitive in comparison to other races. Because human beings also lived a mere 80 to 100 years at best, they also lacked the physical fortitude to survive long-distance space voyages, as well.

All of that changed, though, with the creation of artificial intelligence and genetic engineering. These two scientific endeavors, new to the human race, would simultaneously propel them into the space age, and also fracture them into the factions of the modern age. Beginning with artificial intelligence, or A.I., the humans sought to create a form of life that was intellectually and physically superior to them. They began with simple machines, but soon they were able to create programs capable of self-construction and, in a loose sense, evolution. These programs soon took a form of their own, consolidating other, separate programs until it was no longer under the humans’ control.

It was here that the Evolution Wars began, as it would eventually be known by the denizens of the Universe. This civil war was fought between the synthetic life known as the A.I. Core, and the humans themselves. As the Synthetics continued to evolve, the humans were forced to take action to stand a fighting chance.

It is here that the concepts of genetic engineering and splicing became paramount to the success and survival of the human race. The humans began changing themselves, crafting super soldiers that could withstand insurmountable amounts of pain and physical trauma. As humanity lost more and more of themselves in the pursuit of victory over the Synthetics, the tiny schisms in human race suddenly became gaping chasms. The Evolution Wars ended in a shaky truce.

As ideals shifted and technology grew exponentially, humanity fractured into several factions that we see today. The Horde took the genetic knowledge and left first to colonize on distant worlds. The Separatists left, disgusted by the lengths that humanity went to for a simple war. The remaining peoples formed both the Syndicate and the Federation. Egotistical, savage, uncultured, and rash – these are words that have often been used to describe the human race. Despite these things, though, humanity has carved itself a niche in the galactic world and proven that they will not fade away with the passing of time. 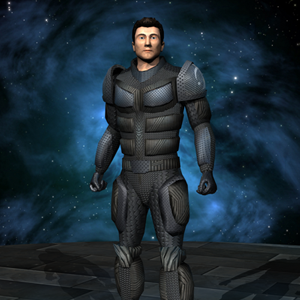